It is bounded by Wurundjeri Way and the Charles Grimes Bridge to the east, CityLink to the west and Lorimer Street across the Yarra to the south and is a primarily waterfront area centred on the banks of the Yarra River. It is now home to several of Melbourne's modern landmarks, including Docklands Stadium and the Melbourne Star Observation wheel.

Docklands became part of the City of Melbourne municipality in July 2007. The suburb's 200 hectares of land and water are on Victoria Harbour, west of the city centre. The area is close to Melbourne's main transport networks, including Southern Cross Station, and is well known as the home to Etihad Stadium and many modern buildings, public spaces and artworks. 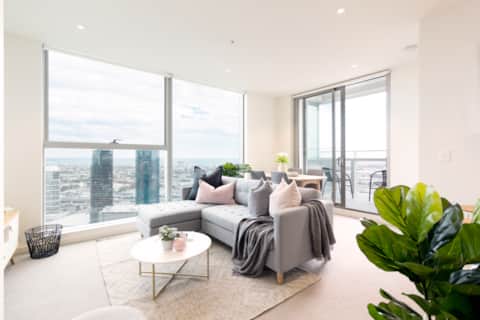 The Wharf - 2 Bed in Docklands

Loading...
Upps!
You're running a web browser we don't fully support. Please upgrade it for a better experience.
Our site works best with Google Chrome.
How to upgrade the browser